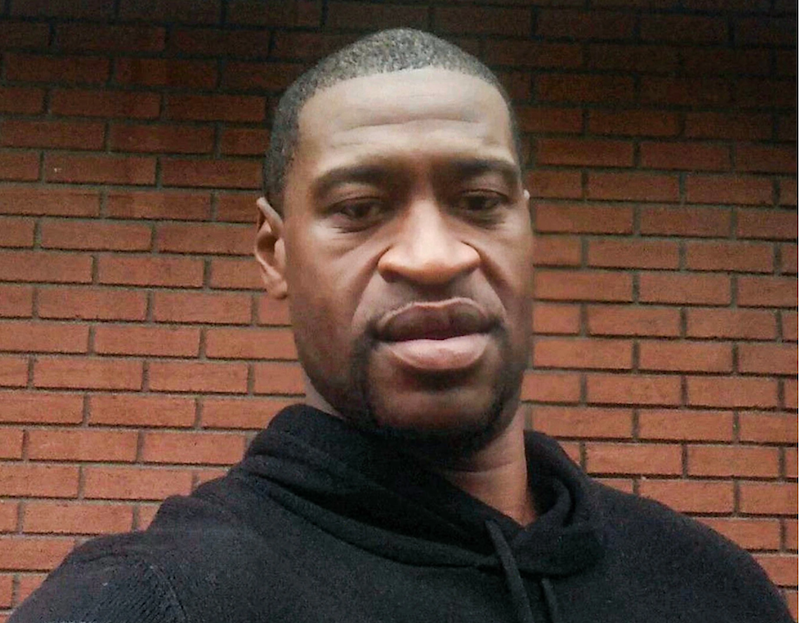 George Floyd, who died after being pinned to the ground by an officer who pressed a knee into his neck. Credit Offices of Ben Crump Law

George Floyd was killed two days after my birthday last year. It was bizarre, having just celebrated my own life, to watch a video and have such a strong reaction to someone losing his. Someone I likely would have never met in the first place. Looking through all the articles about him and his community I’ve surmised Floyd would’ve been like an uncle that dapped up my pops and asked me how work was going just to make conversation but wasn’t super into reading the political articles I write.

It’s nice, for me, to think of the human that might’ve sat at my Thanksgiving table in Brooklyn or argued with my cousins about basketball before conveniently disappearing to get high before the food came out. He was human, despite being a large unarmed Black man perceived as a threat who had the cops called on him, he was human. And this past week, as I gingerly follow the Derek Chauvin case, I see the lawyers working overtime to remind people of just how human Floyd was before and while he lay dying.

If it wasn’t always directly related to my job, I doubt that I’d sit and watch many court cases. I vaguely remember being a kid climbing around on my grandmother’s marble living room table watching my family watch the O.J trials. A giant tan leather couch with deep cushions, my dad sprawled on the left and grandmother sitting upright on the right with some tea and popcorn, faced one of those square TVs with the fat backs. They sat riveted, albeit bored looking sometimes, trading commentary. It was an interesting cultural phenomenon to witness and something I’m sure many Black families did and are doing now with better technology.

George Floyd isn’t on trial though, Derek Chauvin is.

I’m not a lawyer, so I’m not going to pretend to understand the ins and outs of building a case outside of what I see on TV, but I do know it’s weirdly retraumatizing that they have to spend the first week of a murder trial just reminding people that the victim was human. He was a human who lived, sometimes with flaws and clear addiction. He breathed and loved before he got to that store, and only one of those things changed after he left.

He was a person first and then an unarmed one subdued on the ground, and because this is America, he was entitled to the whole gambit of due process and trials and innocence before having a death sentence ‘on accident’ no matter what he was accused of. If cops taking in mass shooters can remember that and keep them alive, then why is Floyd dead?

It’s that astoundingly unanswered question, I imagine, really drove people of all colors and creeds into the streets in protest last year and what keeps some of them in the streets now. I feel like a large part of the trial so far is also just showing how much Floyd’s death haunted the people at the immediate scene. The ones that didn’t have the courtesy of a screen between the screams and the reality of what was happening.

It’s crazy that it takes that level of tragedy to inspire empathy unless you’re directly touched by a situation. There’s whole philosophies and religions even made up by old dead, usually men, that predicated on what makes us human to one another. Plato’s one over many and the cave. Kant’s categorical imperative. In the end, human beings have a fascinating capacity for compartmentalizing, and in some cases, ignoring others suffering as a means of survival.

The way shock gripped bystanders tight when they saw Vilma Kari, an elderly Asian woman, being beaten by a large Black man who was an actual threat is a testament to that. Two security guards nearby closed the doors on her suffering, turned away, and did not intervene even though it was their jobs.

There were three other cops standing over Floyd, who also did little to nothing of consequence for that whole nine minutes. Not all of them white.

Really, it’s probably the fact that a person can do that to another person so brazenly that freezes them like deer in headlights, and the added element of hate, internalized racism, and discrimination that drives it home. You don’t want to die, or get involved, or save this person, this victim, that you don’t see yourself in. Why?

Is it really just a representation thing? Like I have to be familiar with you to remember you’re a human being that doesn’t deserve to die, like me. I truly and deeply hope I’m not like that for someone, or that someone isn’t like that when my turn comes to be a Black female target.

My best friend said that people selective care because you just can’t save everyone.

I get that. We’ve all felt the tonal shift from last year as the Black Lives Matter protests petered out and things started reopening. People started itching to live their lives again and I don’t begrudge them that. Hell, it’s a privilege just to be still breathing after last year, let alone be in whatever skin you may be wrapped in.

There are billions of us, way too many to save.

I can care though. I can care about the people I see, my block, my community, the ones that look like me and the ones that don’t even like me. Eventually, I’ll get to the boroughs, the city, and the state. I have some serious misgivings with its legal and policing system, and I may never get to visit all the parts of it, but eventually, I’ll care about my country and other countries too.

I don’t think the charge is to save everyone. I think it’s to remember, while you’re out living your life after the fever dream that was the COVID lockdown, that you have the capacity to give a shit about someone’s humanity and that kind of disruptive innovation could save a life one day.