Op-Ed: Debates and Forums Before and After Elections are Critical to Democracy 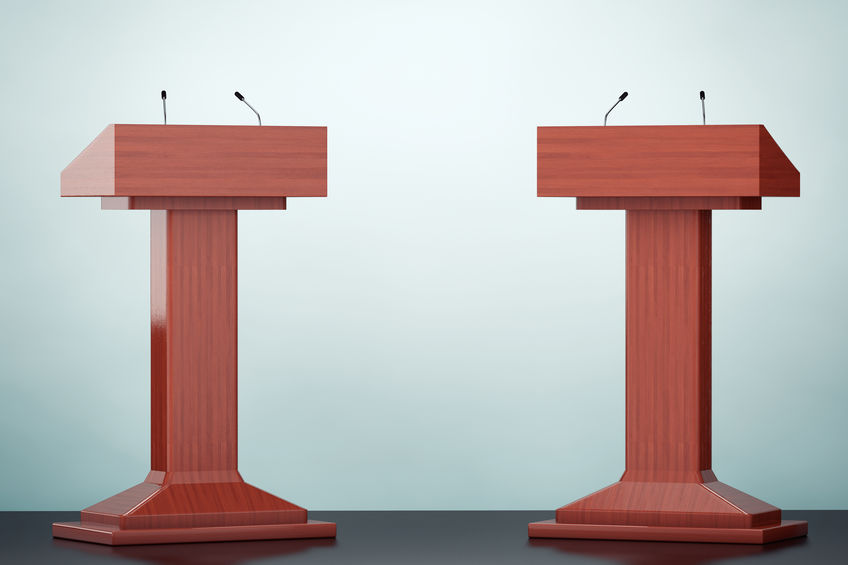 In a one-party dominated state with closed primaries like New York, debates – especially in city and state races – are critical to democracy, as are public forums held by officials once elected.

Voter turnout in New York City and State is abysmally low in both primaries and general elections, and this must change if we are to have elected leaders who truly stand for the people. The media needs to cover city and state races, and incumbents need to agree to debate, often and early. By illuminating important issues in races, engagement and turnout will increase. Otherwise, voters will have little incentive to show up for general elections, and an exceedingly small number of primary voters will continue to select state leadership. Failure to debate policies only reinforces one party rule.

Much is at stake for New York. The deeper the State’s color, whether blue, red or otherwise, the more important it is to debate the issues. Incumbents often believe it is not in their best interest to debate because it could provide their opponent a forum. But any party candidate who truly stands for democracy should be encouraging multiple exchanges with the opposition. Besides, if they are confident enough they are doing right by the voters, losing an election should be of little concern to them in the first place.

Unfortunately, debate refusal has become an increasing phenomenon at every level of electoral politics. After months of refusals, and bowing to public pressure, incumbent Democrat Governor Kathy Hochul finally agreed to one debate with Congressman Lee Zeldin, which was telecast exclusively on Spectrum/NY 1, which only reaches cable subscribers and is not available in many areas statewide.

Other statewide offices have not enjoyed publicized debates at all. In local races, the majority of Democratic nominees across the city refuse to engage in informative discourse with their opponents, whether they be to the left or the right of them. This inevitably leads to a lack of choices for voters, a lack of democracy in our state and the stagnation, corruption and grift that unavoidably follow sustained periods of one party rule.

This is especially galling because the Democrats relentlessly insist their opponents are a “threat to democracy.” However, their refusal to debate is more than a bit ironic since it stifles public deliberation, and therefore suppresses democracy. Democrats often seem either unwilling or afraid to defend their positions in a free exchange of ideas. As such their incessant raving about “threats” is beginning to seem to many as gaslighting. Constantly preaching about the evils of one side, while not elaborating on the good of your own is the very definition of propaganda.

The First Amendment guarantee of a free press protects the dissemination of speech and acts as a check and balance on the workings of our fragile democracy. Local and statewide media outlets have a responsibility, consistent with their critical role in supporting free and fair elections, to provide voters with as much information as possible. News outlets have become too accustomed to taking a side in politics instead of informing the public objectively. It is not the media’s role to shield one party or any particular candidate from scrutiny or public examination. It’s their role to shine a light on the positions and policies of each and every aspirant who makes the ballot.

Legally mandated debates for candidates, as well as mandated town halls and forums for those who become elected are essential to a working democracy. Our state Assembly and Senate should pass legislation ensuring election agencies at all levels of government cooperate with the press to make these essential forums a consistent and ongoing practice.

Elections without debates run counter to democratic principles by depriving the public the opportunity to assess the candidate’s response to critical issues in real time. The media needs to do its part in significantly expanding the coverage of these races, which will naturally incentivize candidates to debate, especially entrenched incumbents. Once in office, elected officials who hide behind the veil of partisan media no matter its ideological bent need to start engaging with the public on a regular basis.

It is a harmful precedent and practice for the ruling party in any jurisdiction to cut off political debate or public discussion. The press should not be in cozy collusion with power by shielding and promoting its agenda, but instead holding it accountable, separate and apart, with complete objectivity. Without debates and public forums we are further entrenching the current system where only a select few who may hold the most extreme positions are electing our leaders. This is not democracy.

Maria Danzillo is the senior advisor to New Yorkers for Competitive Elections.