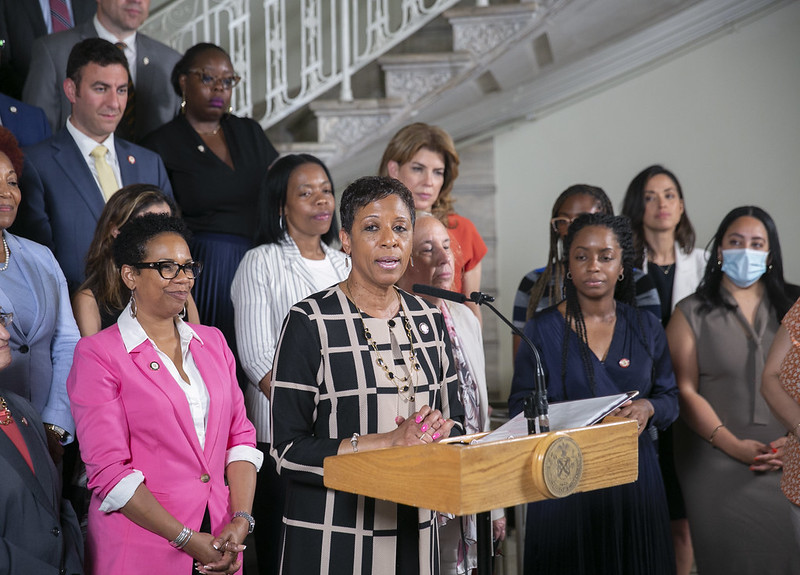 The City Council is set to hold a special hearing on Aug. 9 to look at the conditions in the city’s homeless shelters, and specifically zeroing in on the recent influx in asylum seekers Mayor Eric Adams says is overwhelming the system, PoliticsNY has learned.

This will be a hybrid hearing run by City Council Speaker Adrienne Adams and Council Deputy Speaker Diana Ayala, who chairs the body’s Committee on General Welfare, according to a release shared with PoliticsNY. The committee expects to hear testimony from Adams administration officials, who’ve received criticism from homeless advocates about their response to the crisis.

“New York City is in the midst of a housing crisis that is exacerbating homelessness and must be confronted with expanded access to affordable housing. We also know that the shelter system has suffered from longstanding issues that are unacceptable and must be addressed. The city has a responsibility to ensure adequate conditions in our shelter system for all residents, whether it is those who have sought asylum from another country or not,” Speaker Adams and Ayala said in a joint statement.

“The Council will hold a critical oversight hearing to examine how the mayor’s administration is handling these issues to uncover the real challenges and identify solutions. It is crucial for us to be clear about the steps needed to ensure access to safe temporary shelter and a pathway to permanent affordable housing for people in our city,” they added.

In statement, Mayor Adams’ spokesperson Kate Smart said the administration is “grateful to the Speaker and the Council for their partnership on this important issue.”

“We need as much help as possible from our partners at every level of government and look forward to discussing how we can welcome asylum seekers to New York City and provide them with the right services and shelter,” she added.

In an impromptu press conference last week, Adams defended his administration’s handling of the crisis in response to criticism from homeless advocacy groups like the Legal Aid Society and the Coalition for the Homeless. The groups said the city’s Department of Social Services (DSS), which runs the shelter system, didn’t find housing for several families in a timely manner last week – leading many of them to sleep on the floor of the system’s Bronx intake facility.

During the news conference, the mayor admitted that the city had been in violation of its right to shelter policy, by not finding beds for four families early last week, who then had to stay in the intake facility overnight. Adams said they were an outlier among the nearly 3,000 asylum who’ve recently arrived in the city seeking shelter.

“When you look at 3,000 people hitting our shelter system and immediate response from the infrastructure of our system to address their concerns is what we are talking about,” Adams said at the time. “So any comment or insinuation that we did not respond the way New Yorkers expect us to do so, is just not true.”

But both advocacy groups pushed back on that assertion, stating that they spoke with at least eight other families who had the same experience later in the week. Furthermore, the advocates said that Adams blaming the shelter system’s problems on the recent rise in asylum seekers is a distraction from its longstanding issues.

In a joint statement, Legal Aid and the Coalition for the Homeless applauded the council for holding hearings on the state of the shelter system. They also said they’re “willing to work with the city” on finding a solution to the current crisis.

“New Yorkers deserve answers from the City, and we need assurances that meaningful action is underway to ensure that all families, including those seeking asylum, have unfettered access to shelter, as prescribed by statute and a court order,” they said. “This crisis not only involves the influx of families from the border, but also those who have been forced from their homes due to skyrocketing rents and the lifting of critical eviction moratoria protections.”

This story was updated with a statement from Mayor Eric Adams’ office at 3:10 p.m. on Thursday, July 29.