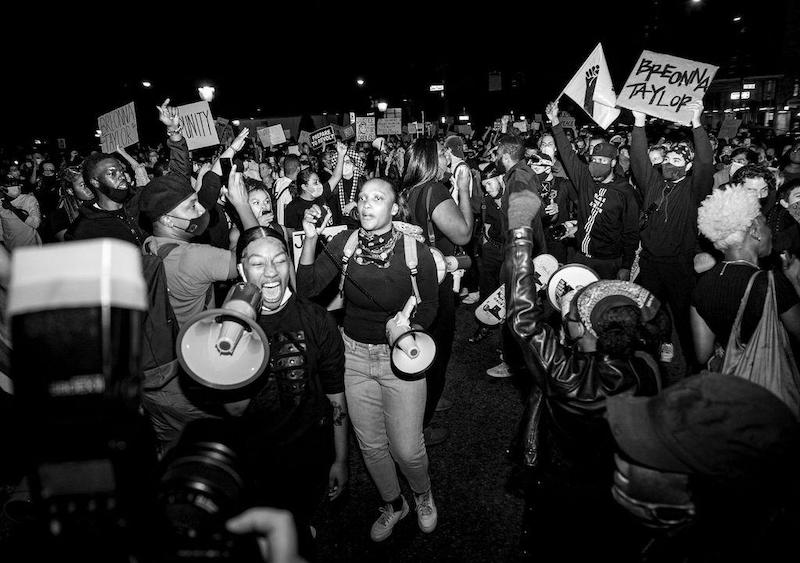 A deluge of peaceful demonstrators took to the streets of downtown Brooklyn and midtown Manhattan yesterday after Kentucky Attorney General Daniel Cameron and the grand jury decided not to indict Louisville officers on criminal charges for the shooting death of 26-year-old EMT worker Breonna Taylor.

“As Martin Luther King Jr. famously said, ‘Injustice anywhere is a threat to justice everywhere.’ The indictment in the killing of Breonna Taylor does not address the fatal injustice she suffered. The prosecutors fell short of their duty to the people. We must press onward to demand greater accountability, and I thank the protesters in New York City for making their voices heard last night in a peaceful manner,” said Borough President Eric Adams.

Thousands gathered en masse in parks and public squares, like Barclay’s Center, and crossed the city’s Williamsburg, Manhattan, and Brooklyn Bridges in solidarity with protesters in Kentucky and other states. They rang bells, carried bikes, clapped, shouted, chanted, and held signs for Taylor.

Somalia-Rose Muhammad, 24, co-founder of Save Our SISTERS NY, said she went to the protests that were both in Manhattan and Brooklyn.

“We successfully and safely led thousands of people across the [Williamsburg] bridge. Throughout the night there were several chants of cry that were let out. The energy was intense and it was clear that many were emotionally affected by the results of Ms. Taylor’s case. The most unprotected person in America is the Black woman, according to Malcolm X, and that was clear as day after seeing the complete disregard to Ms. Taylor’s life, who spent her life helping to save and care for others. Breonna Taylor, you will always be essential. We love you, we miss you, we will get justice for you,” said Muhammad.

Frank LaChapelle, a student at New York City College of Technology (aka City Tech) in Downtown Brooklyn, said that people felt upset and outraged but not tired.

LaChapelle said their group started marching last night from Central Park on 59th and 5th Avenue and ended in Williamsburg, and the organizers were very adamant about not engaging with the police because it was a peaceful protest.

There were no arrests made in regard to protests in Manhattan and Brooklyn yesterday, according to the New York City Police Department.

“Through all the pain and trauma and sadness that we feel as Black people throughout our entire lives and this summer, there was something beautiful about us all being unified last night,” said Ossé, who is also co-founder of Warriors in the Garden.

“As a Black queer man, I have to uplift Black women’s voices. They need to be heard. I think a Black woman’s experience is starkly different to anyone else’s in America,” said Ossé, “If there isn’t liberation for Black women then there’s no liberation for any of us.”

Ossé said that there “wasn’t justice for murder” yesterday, and even some of the measures the city took to appease the Taylor family and curb protests weren’t enough.

Louisville city officials paid the family a $12 million settlement days ago and promised police reforms. The city also introduced Breonna’s Law in August, which banned no-knock warrants, would test officers for drugs and alcohol involved in shootings, and require body cameras be worn during any raids.

On March 13, reported the Courier-Journal, at about 1 a.m., plainclothes officers arrived at Taylor’s apartment with a no-knock warrant as part of a larger narcotics investigation. Police said they knocked and announced their presence. There was confusion as to whether the neighbors also heard the cops announce themselves or were at the right house to begin with, reported the New York Times in a two-part series. Taylor’s boyfriend, Kenneth Walker, told investigators they never heard the cops. When officers used a battering ram to knock open the door, he fired a single shot from his Glock pistol, severely injuring an officer. Sergeant Jonathan Mattingly, and officers Myles Cosgrove and Brett Hankinson, opened fire into Taylor’s and her neighbor’s apartments in response.

Afterward, months of swelling and contentious protests in Kentucky and across the nation demanded legal justice for Taylor’s collateral death in the gunfire.

The announcement was made yesterday afternoon that only Hankison, who erroneously shot into a neighbor’s house, would face charges.

“There were 32 rounds shot as a result of only one bullet being shot from Kenneth Walker, Ms. Taylor’s boyfriend. That alone should show excessive force that 22 shots were fired back ‘almost simultaneously’ according to AG Cameron. If Cosgrove was able to only see Walker standing there with a gun, then why did his shots aim and kill Ms. Taylor?” said Muhammad.

Violence did erupt from protests on Wednesday night in Kentucky where two officers were ultimately shot by one alleged assailant and are reportedly in stable condition. There were over 100 arrests of protesters by the Louisville Police Department, reported Courier-Journal.

“I am disgusted that the Kentucky Attorney General Daniel Cameron did not seek charges against the officers for murdering Breonna Taylor and that the grand jury indicted one officer for his rounds going into another apartment, but not because they went into the body of Ms. Taylor. This is a clear example of why we continue to march, chant and push for legislation,” said Beckford.

Beckford said that this was a clear example of the need to take funding away from “militarized” police and redistribute it back into the community, and set the example on a state level that will bring about full accountability of all officers who enact violence against Black people.

“Yesterday, we marched from the Barclays Center across the Bridge to Manhattan and made our voices heard. We made sure the name of Breonna Taylor was heard. We marched back to Brooklyn across the Williamsburg Bridge and did the same. It is time for the people to stop standing on the sidelines and join in this fight. We have the numbers and we can make change,” said Beckford.