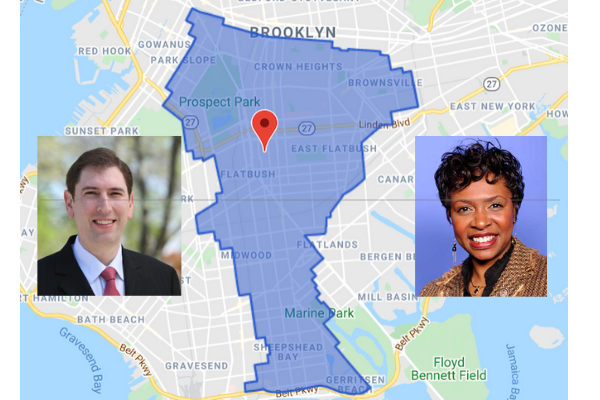 In a one-two punch this week, City Councilmember Chaim Deutsch, one of four candidates challenging incumbent U.S. Rep. Yvette Clarke in the upcoming NY-9 Congressional District Democratic Party primary, made both a strong appeal to his Jewish voters base, while alienating a good many black voters, who make up about 51 percent of the district.

The biggest bomb Deutsch dropped was a slightly more than one-minute YouTube video featuring clips of recent looting, assaults on the NYPD, coronavirus victims’ stacked in body bags, and anti-Semitic violence on the streets of Crown Heights.

The video makes no mention and fails to show any clips of the reason behind the recent protests – the final minutes of George Floyd’s life, in which a white police officer calmly keeps his knee on his neck, allegedly killing him, as three police officers look on.

“Businesses shuttered, businesses boarded up, gangs of looters roaming through the city, fires burning in the streets, cops being stabbed, cops being beaten and spit on,” says Deutsch in the voiceover of the clips.

“Why? It all comes down to lack of leadership,” says Deutsch as he comes on to the screen.

The other bomb Deutsch’s campaign released was a letter of support from orthodox Jewish female leaders in his district.

A group of nearly 20 Rebbetzins (female leaders) from the Flatbush-Midwood region released a letter emphasizing just how high the stakes are.

“In addition to being a counterweight to the antisemitism that we have seen displayed by sitting Congress members, Chaim Deutsch will be in a position to be a powerful advocate for the values and principles that are the very foundation of our way of life,” they wrote.

The group of women also took Clarke to task in their letter, writing  that “[she’s] an incumbent who has demonstrated disrespect for our community on numerous occasions.”

Rebbetzin Esther Reisman, one of the signers and a long-time supporter of Deutsch, explained that it was Clarke’s alignment with U.S. Reps. Ilhan Omar and Alexandria Ocasio-Cortez that severed their trust.

“She’s backed legislation condemning Israel and has joined people like Ilhan, Rashida, and Ocasio-Cortez in criticizing Israel,” she said.

Deutsch’s opponents in the political contest – Clarke, Adem Bunkeddeko, Isiah James and Lutchi Gayot – were quick to criticize Deutsch, who thus far has not participated in any debates.

“Now more than ever, we need leadership that seeks to unite our community, instead of using divisive rhetoric. Congresswoman Clarke has been a stalwart fighter for all members of our diverse district and has proven that she is on the side of the people, regardless of race, gender, ethnicity, religion or sexual orientation,” said a Clarke spokesperson.

“Based on Councilman Deutsch’s record and most recent campaign video, it does not appear that he shares those values or the values of the people of the 9th District of New York,” the spokesperson added.

Bunkeddeko called Deutch’s scare tactics reprehensible, but not surprising given his history of bigotry toward the LGBTQ community and stances on criminal justice reform. “True change comes from electing a new Congressmember committed to bringing our community together and rising above the challenges of our times,” he said.

James said the campaign video “is the single most inflammatory thing I’ve seen since I’ve stepped into politics.

“It offers no solutions to the problems we face in our city and doesn’t speak to the solutions that are needed to move forward, together. What his ad seeks to do is to play on fears and division and that is wrong. We should be seeking to heal our community, not further divide it,” said James.

Gayot said the video was an example of old versus new.

“We need fresh ideas moving forward in NY-9 The last thing we need is the reopening of old wounds. The only way we will get along is if we work together to move humanity forward. Chaim has been missing In action. I have not seen him in my neighborhood once. How will he mend the divide when he doesn’t even bother to show up. It’s time for a new generation of ideas,” said Gayot.

Divisive or not, Deutsche is a shrewd political operator and the well-worn tactic of mobilizing your base might just work, as almost his entire city council district in Southern Brooklyn is in the larger Congressional district. This includes Brownsville, Crown Heights, East Flatbush, Flatbush, Kensington, Park Slope, Prospect Heights, Midwood, Sheepshead Bay, Marine Park, Gerritsen Beach and Prospect Lefferts Gardens.

Although the Congressional district is majority black, it includes a sizable Orthodox Jewish vote and roughly 3,000 Republican Russian-American voters who have reportedly switched their registration over to Democratic for the Congressional primary.  As the only white candidate in the race, it is also possible the other candidates – all black – can split the black vote.