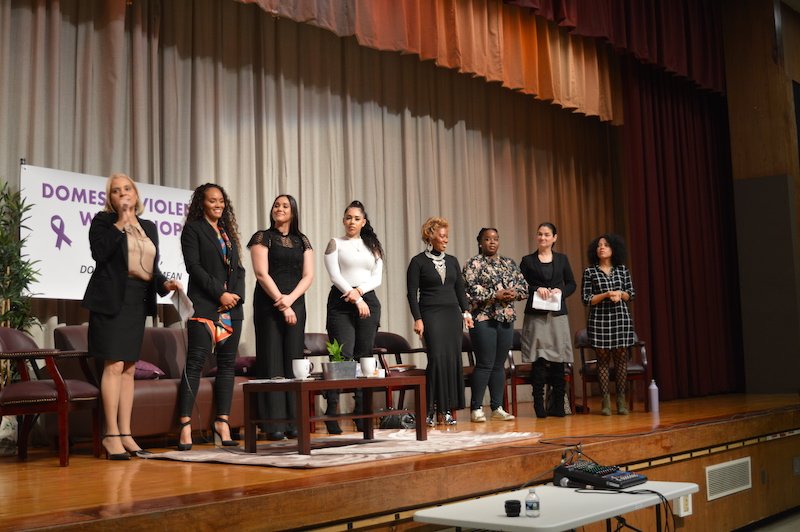 For Assembly Member Maritza Davila (D- Bushwick, Williamsburg) holding a domestic violence workshop is personal and Saturday as she kicked off the workshop, titled “I Love You, Doesn’t Always Mean I Love You,” she opened up about her own experience.

“One of the reasons why I’m so passionate about domestic violence [is] I was a victim myself for 10 years,” Davila said. “A victim before I ever became an assemblywoman or a school board member, and to me this is passion. This is important that we share information, especially for those who probably don’t know which way to head.”

The event was held at I.S. 291 in her native Bushwick, and according to Davila, domestic violence is common in the neighborhood, making it a good place to hold the panel.

The event focused on domestic violence between romantic partners, especially by a man to a woman, though the speakers did note that men can be victims of domestic and sexual violence, too. Violence by parents towards children was not discussed.

“I Love You” centered around three survivors of domestic violence — Evelyn Lozada of “Basketball Wives,” Jessica Castro of “Married at First Sight” and Sara Molina, rapper Tekashi 6ix9ine’s former girlfriend — who shared their stories and responded to questions.

“But really, what made me open my eyes and realize what was happening in my life was when I watched,” said Castro, who was verbally and emotionally abused by her former partner, whom she met on reality TV. “I watched it with the world and I realized, as a woman, as Jessica, as a Latina, I lost myself, because I was so in it, and I wanted it — the marriage, I wanted the house, I wanted the white picket fence, and I thought that that kind of relationship was going to get me there.”

After they spoke, the focus was turned over to the other four panelists for a more formal discussion of programs and offices that can help domestic violence victims.

“Domestic violence doesn’t have anything to do with love,” said Brooklyn Supreme Court Justice Evelyn Laporte. “It is sad that in 2020 we’re still talking about domestic violence as a new phenomenon when this is old but so difficult to deal with.”

Other professionals on the panel included Trancey Downing, the deputy bureau chief of the Domestic Violence Bureau of the Kings County District Attorney’s Office; Alba Espinal, of the DA’s office’s Victims Service Unit; and Alethea Best, the Relationship Abuse Prevention Program coordinator for Day One.

Additionally, the workshop was held in partnership with the North Brooklyn Coalition, a community organization aimed at supporting victims of domestic and sexual violence through support groups, therapy and legal advocacy.

“I think that domestic violence is an issue that affects all people of all ages, all genders, and we want to make sure that we are especially focusing on our youth, because, as what was said on the panel, I just want to echo that, [if] we are able to connect with our youth early and educate them early about domestic violence, about healthy relationships, unhealthy relationships, we can potentially stop the cycles of violence that we see going through our families, going through the generations in our communities,” said North Brooklyn Coalition Executive Director Patricia Ross in an interview with Kings County Politics.

The panel got a standing ovation from the audience, many of whom came with their family or friends.

Some were members of organizations that deal with domestic violence, while others were just members of the community.