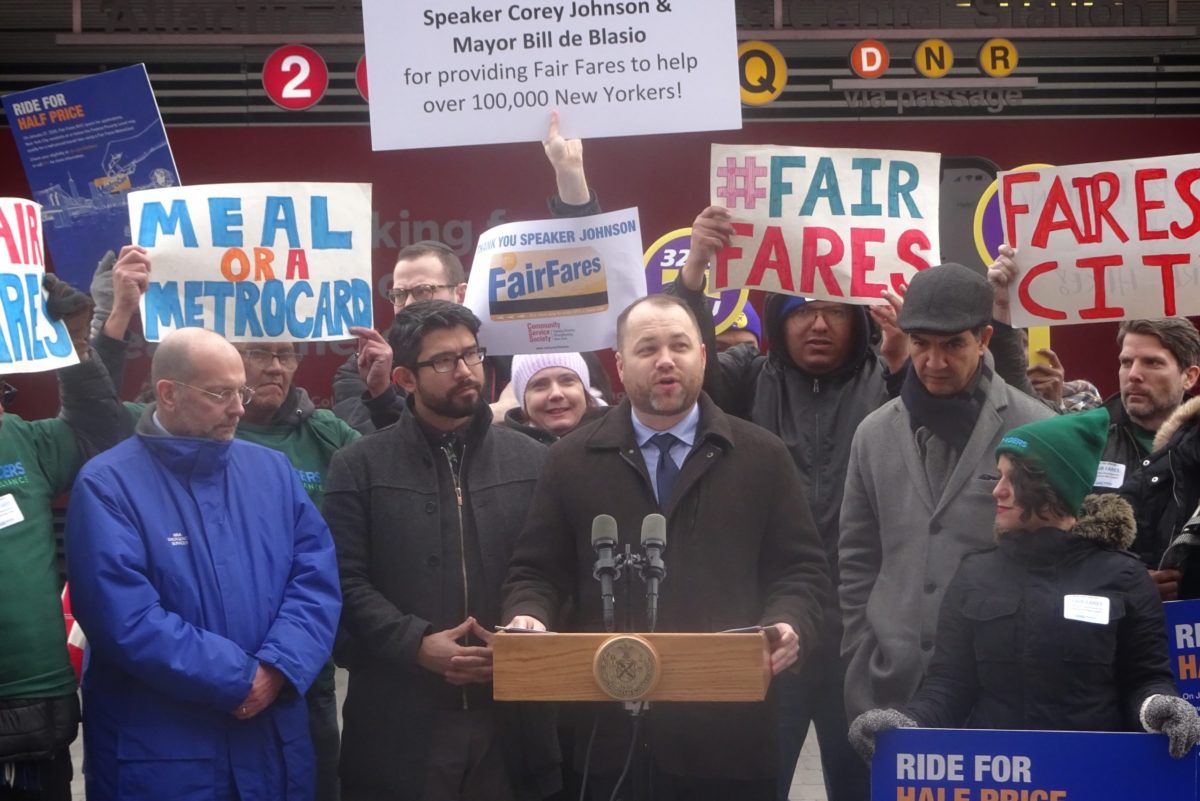 Life has never been easy for longtime New York resident Rhonda Jackson. As a low-income New Yorker, Jackson had to sacrifice a large portion of her salary just to navigate the city. Just the act of going to work, seeing a doctor or visiting her grandchildren took a chunk out of her paycheck.

But this year, the City lifted that burden off her shoulders by announcing open enrollment in the Fair Fares program. Starting yesterday, all New Yorkers at or below the federal poverty line can apply for reduced fare MetroCards.

“Sometimes I had to make a choice between buying a MetroCard or seeing my grandchildren, which wasn’t fair,” said Jackson. “Having this program means I have the freedom to travel affordably through my wonderful city. On behalf of all the riders, I want to thank the de Blasio administration, Commissioner Banks, Speaker Johnson and all the Council members who fought diligently to make this happen.”

“New Yorkers living in poverty make difficult choices daily about how to spend money, sometimes sacrificing basic necessities like warm boots to pay for transportation costs,” said Johnson. “Today, we are attempting to ease their burden by making half-priced MetroCards available to all residents who meet the federal poverty threshold. Already, more than 100,000 New Yorkers have enrolled in Fair Fares but we know so many more people can benefit from this program. I urge anyone who is eligible to sign up.”

The Fair Fares program began last year, to connect the City’s poorest residents with vital transportation assistance. Initially, the program covered New Yorkers who were receiving Cash Assistance and SNAP benefits; last fall, it expanded to include CUNY students, student veterans and NYCHA residents. Since its inception, over 100,000 New Yorkers have enrolled in the program.

Council Member Rivera pointed out that transit costs can account for as much as 10 percent of a New Yorker’s budget. This, she said, is not a new development; public transit always has been, and always will be, an integral part of any New Yorker’s life.

At the conference, one reporter expressed concern about the New Yorkers who may “slip through the cracks”: in other words, the ones who make slightly too much money to qualify for the program. In response, Johnson assured him that the announcement is just a “big first step” in a continuing effort to make NYC the fairest and most equitable city in the nation.

“This is a big first step; this is a huge deal,” said Johnson. “We secured $106 million dollars in the budget [for Fair Fares], which people thought was impossible. This is gonna help, potentially, up to 800,000 New Yorkers. We already have seen over 100,000 New Yorkers who have signed up for open enrollment. That is what we’re focusing on right now.”

If you think you may qualify for the Fair Fares program, visit www.nyc.gov/fairfares.