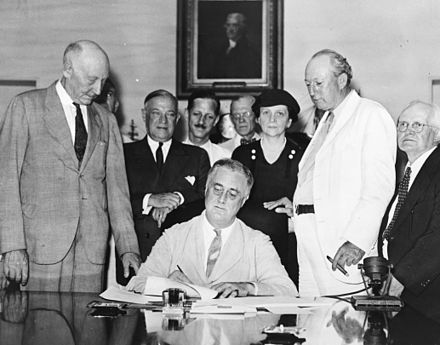 The report, which can be found here, stresses that while Social Security protects people from poverty, only a small amount of Americans have other sources of retirement security and that “the rest of our retirement system is in crisis.”

According to the report, less than half of wage earners have defined contribution accounts such as 401(k)s and one-third of near-retirees lack a defined benefit pension or contribution plan.

In the 1980s, around 30 percent of Americans were at risk of meeting their standard of living in retirement. Today, the report finds, the number is around 50.

President Franklin D. Roosevelt signed the Social Security Act into law on August 14, 1935. It has been a major part of retirement security for Americans since then, but was nevertheless considered only one part of the so-called “three-legged stool”, a term which refers to the combination of Social Security, pensions and private savings.

According to the report, that “three-legged stool” has been weakened.

“Despite Social Security’s success, the other two major components of our nation’s retirement system – private savings and pensions – are failing hardworking Americans. As a result, roughly half of Americans are at risk of losing their current standard of living in retirement,” said Maloney.

A 2015 study estimated the current elder insecurity rate for Brooklyn to be at 77%, compared to a statewide rate of 58%. A 2016 analysis by Comptroller Scott Stringer’s office found that within New York City “three out of every five workers has no access to an employer-based retirement savings plan”.

“Women and people of color are much more likely to suffer from retirement insecurity. This is the largely the result of economic inequalities that they experience throughout their working lives,” reads JEC’s report. “Personal savings and investment still comprise one of the three “legs” of the American retirement system, and the vast disparity in financial assets across racial groups is a key contributor to racial disparities in retirement security.”

The report outlines that over half of Americans rely on Social Security on some portion of their income, with many of those being low earners and minorities.

The report reads, “Nearly half of all seniors get a majority of their retirement income from Social Security, and one fifth are almost completely reliant on the program, receiving over 90 percent of their income from benefits. These are workers who have been unable to save enough for retirement through employer-based retirement plans and personal saving, and who would surely be impoverished without Social Security.”

“Even those who take extraordinary steps—like working until 65 (five years past the current average retirement age), annuitizing all financial assets or reverse-mortgaging their homes—may not be able to maintain their living standards. Worse, forty percent of workers ages 50-60 who are not currently poor would be poor if were they retire at age 62,” reads the report. “All Americans have been affected, but women, blacks, Hispanics and those with low earnings or less education have been especially hurt. Americans need a retirement system that works for everyone.”