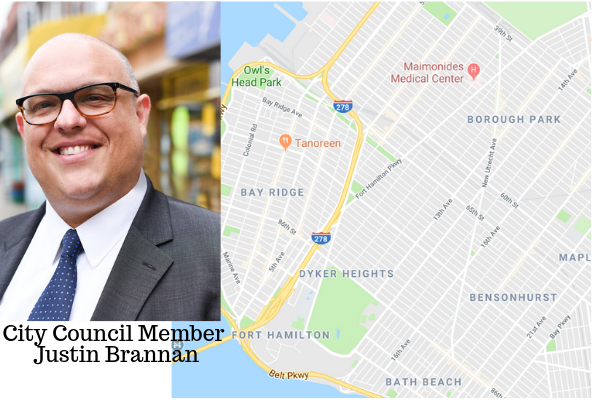 City Councilman Justin Brannan (D-Bay Ridge, Dyker Heights, Bath Beach, Bensonhurst) this week fired off a letter to the city’s Department Of Buildings (DOB) demanding the agency crack down on illegal conversions of one-and two-family homes into up to six apartments – mainly in Dyker Heights.

But Brannan said while it was his responsibility as an elected official to find these unscrupulous landlords and shut down their illegal and unsafe practices that seek to exploit vulnerable, low-income and often immigrant tenants, it is also his responsibility to search for realistic, and affordable housing alternatives for the hardworking people who call this district home.

The two issues are converging as Southern Brooklyn is surging with mainly Chinese immigrants and housing is very scarce in what is considered Brooklyn’s bedroom communities – Bay Ridge, Dyker Heights, Bensonhurst and Bath Beach.

“We have a list of 44 addresses – mostly in Dyker Heights – where we suspect illegal conversions are either in progress or currently exist. All of these locations have been shared with your agency but we are turning blue waiting for action,” wrote Brannan, noting that his predecessor, former City Council Member Vincent Gentile, was a guiding force to Local Law 94 of 2017, also known as the “Aggravated Illegal Conversions” law that instituted heavy fines and strong enforcement to deter the illegal conversions.

“Over the past 5-10 years, our district has seen a surge in illegally converted one and two-family homes. Often a building goes from 2-family to 6-family after unscrupulous investors illegally renovate a house. Our main concern with these illegal conversions is safety – for the vulnerable, low-income and often immigrant tenants renting illegal rooms in substandard and typically dangerous conditions, for their neighbors and for first responders in the event of a fire or other emergency,” he wrote.

Brannan told KCP it’s no secret, New York City is facing a housing emergency and no district or neighborhood is immune to this affordability crisis.

“But illegal, dangerous, and substandard housing is not affordable housing and I will not turn a blind eye while we wait for another tragedy to happen – because it’s not matter of if but when,” said Brannan.

“It is my responsibility as an elected official to find these unscrupulous landlords and shut down their illegal and unsafe practices that seek to exploit vulnerable, low-income and often immigrant tenants. It is also my responsibility to search for realistic, and affordable housing alternatives for the hardworking people who call this district home. We recently worked to create some affordable units on a plot of land where a developer had planned to build a large hotel. But that was just a tiny drop in the bucket. We need to do so much more,” he added.

According to The Bklyner and The Home Reporter – both of which first reported the story about Brannan’s letter, DOB Spokesperson Andrew Rudansky responded that the agency takes all allegations of illegal conversions very seriously.

“Investigating suspected illegal conversions, and ensuring that New Yorkers have safe places to live, is one of our highest priorities,” he said in a statement. “We have a unit dedicated to investigating illegal conversions and we respond to every complaint we receive. We urge all New Yorkers to protect themselves and their families by avoiding these dangerous living situations.”