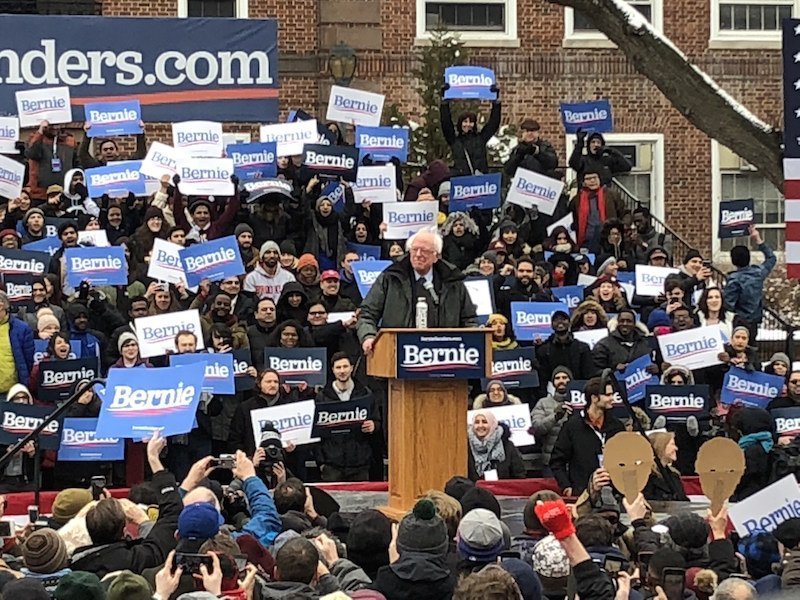 It might have been a cold and snowy day in March but the crowd was feeling the burn.

U.S. Senator Bernie Sanders (D-VT) kicked off his campaign to oust President Donald Trump from the White House this weekend at Brooklyn College in Flatbush. Hundreds of progressive supporters showed up for the event en masse coming from as far as New Jersey to see the presidential candidate.

Sanders is native Brooklynite, born and raised in Midwood. He attended James Madison High School before going on to Brooklyn College for one year and then transferring to the University of Chicago.

Turner’s speech, themed “the measure of a man,” highlighted Sanders’ ongoing political work and commitment to improving the daily lives of normal Americans.

“We have an enormous amount of work in front of us. If we stand together, if we don’t allow Trump and his friends to divide us up, there is nothing we cannot accomplish. This country has an extraordinary future. Let’s make it happen,” said Sanders.

Sanders also promised the crowd that he would win the Presidency in 2020, declaring an outright battle to oust Trump.

“We aren’t going to concede one state to Donald Trump,” declared Sanders.

This is a repeat run for Sanders who first looked to make it to the White House in 2016 as the most progressive candidate on the ballot. This time around he will have to contend with a field of left-leaning candidates including U.S. Senator Elizabeth Warren (D-MA).

“I hope that during this campaign you will come to know the man I love, admire and respect. This isn’t a moment, this is a movement,” said Jane Sanders.