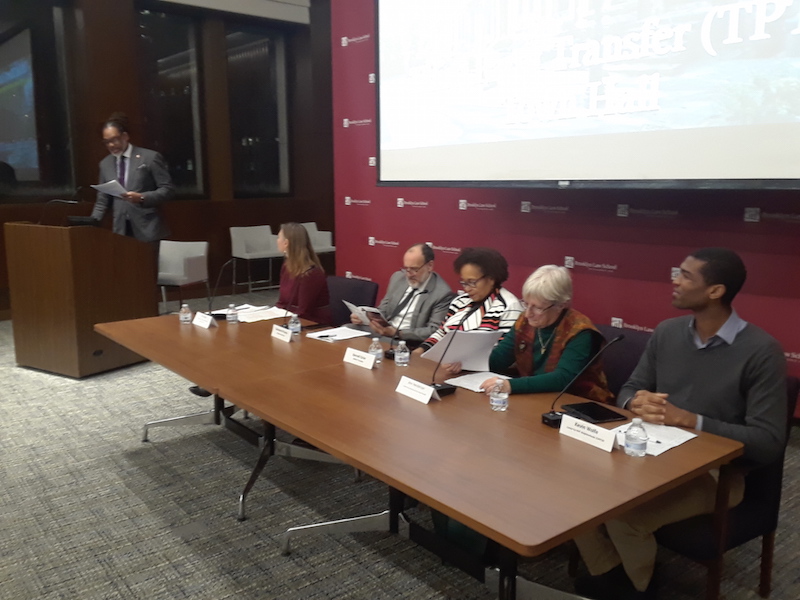 Editor’s Note: The following is the 17th of a KCP investigative series by reporters Kelly Mena and Stephen Witt on how New York City is taking paid off properties from longtime small property owners, including black and brown seniors, and giving them to connected non-profit and for-profit developers as gentrification sweeps across Brooklyn.

City officials finally came face-to-face with Black and Latino homeowners from across Brooklyn during a Town Hall meeting at the Brooklyn Law School in Downtown Brooklyn last night.

The meeting was the second in a series of community confrontations between city housing officials and local residents following the continuing KCP series, which has found HPD seizing of four completely paid off properties  – three of which are black owned and one of which is a co-op building in which six working-class Latinos own.

One of night’s most interesting moments came when Grier mentioned her past as a board member of Neighborhood Restore, the city organization who works in conjunction with HPD to decide the new non-profit and for-profit “affordable housing” developers that get properties entered into the TPT program.

“First off all full disclosure, when the Third Party Transfer program was created I was actually one of the original board members and working on the board of Neighborhood Restore,” said Greier, whose non-profit is in the pool of HPD’s favored developers for getting properties through the program.

Another highlight of the evening was the vagueness of answers given by Darga, who when posed with the question of equity when it came to homeowners who lose their properties to the program was lacking in answers.

“Tonight I will have to check with the law department about the timing and the process,” said Darga.

Grier seemed to note that the reason former homeowners aren’t compensated for their equity in the building was due to the work the new developers have to invest to “renovate” the “distressed” property.

“The existing debt or the tax liens have been absolved but because the buildings need repair. So the debt that comes in goes away because it is the fact that the building is brought up to code,” added Grier.

Also on hand to hold the city officials accountable was a formidable opponent of the current controversy surrounding the TPT program, State Senator Velmanette Montgomery (D-D-Bedford-Stuyvesant, Fort Greene, Clinton Hill, Boerum Hill, Sunset Park) who personally asked for a response to her and a coalition of state lawmakers who sent a letter to HPD calling on a moratorium on the program.

Darga again gave a vague answer and per one other representative from HPD, was able to briefly respond that they are “drafting a response to the moratorium.”