The two new measures went into effect on Thursday and are part of the Stop Sexual harassment NYC Act. A package of legislation passed by City Council and signed by Mayor Bill de Blasio last May designed to further address and prevent sexual harassment in the workplace.

This package of 11 bills addresses issues of sexual harassment trainings across sectors, the availability of information, data collection from city agencies, and the expansion of protections under New York City’s Human Rights law.

The two new policies that went into effect this week include: a requirement that every employer across the city display an anti-sexual harassment rights and responsibilities poster (in English and Spanish at a minimum) designed by the NYC Human Rights Commission in work spaces; and that the NYC Human Rights Commission develop an information sheet on sexual harassment that employers must distribute to individual employees at the time of hire, which may be included in an employee handbook.

“Sexual harassment continues to plague our workplaces and is a blatant act of gender discrimination, which creates even greater barriers for women to provide for themselves and their families. While New York City remains a leader in promoting women’s rights and gender equality, we must continue to promote stronger policies to promote safe and equitable workplaces for all,” said Cumbo.

Treyger secured $120,000 in the Fiscal Year 2019 city budget to fund new technology upgrades and outfitting that will fold into an overall reimagining of the 2nd floor at the Coney Island branch (1901 Mermaid Avenue).

The tech expansion will include creation of a dedicated children’s space, new public-use computer terminals, printers, and other devices, accessories, and peripherals. The project will also include relevant power equipment and electrical work, as well as new desks, kiosks, seating, power tables, and lighting.
Renovation of the branch’s 2nd floor will include the transformation of the current meeting room into a larger multi-purpose space that can accommodate the needs of educational and after school programs, while continuing to serve as one of the community’s primary public meeting spaces.

“Our libraries are part of the connective tissue of our communities, and they serve as a portal, providing local residents of all ages with a gateway to assistance, enrichment, and opportunity. It is more critical today than ever before that our libraries – where many residents go to connect with the world, to further their education, or to conduct all manner of research critical to their physical and social wellbeing, and where our children develop the foundational skills that will help guide them into adulthood – are equipped with contemporary technological tools and resources,” said Treyger. 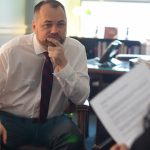 City Council member Carlos Menchaca (D-Sunset Park, Red Hook), Chair of the Committee on Immigration, alongside Speaker Corey Johnson held the first attempt in the nation to have an open and public discussion about Immigration and Customs Enforcement (ICE) and its role in immigration enforcement yesterday.

The meeting explored the idea of abolishing the immigration agency and establishing a more humane and sensible immigration enforcement system.

The hearing also discussed a new city bill and vote on a recently introduced federal resolution. The bill, Intro. No. 1092, would prohibit New York City from entering into revenue contracts with immigration enforcement entities. While the federal resolution calls on Congress to pass and the President to sign H.R. 6361, the “Establishing a Humane Immigration Enforcement System Act,” which would abolish ICE and enact sweeping immigration reforms.

“Not only does ICE disregard the constitutional protections of immigrants, but it endangers the rule of law in our city. ICE’s disregard for our judicial system is an egregious attack on our institutions and evidence of the Trump administration’s abuse of power. Ceasing ties between our city and ICE is a step in the right direction towards making sure that our immigrant families can feel safe at work, when dropping off their kids at school, reporting violence, and fundamentally living normal lives,” said Menchaca.

“It is my duty, and that of the City of New York, to protect those who are vulnerable and suffering at the hands of this rogue federal agency. For this reason, we must abolish ICE and work to mend the communities it has torn apart. Let’s begin an informed conversation on dismantling Trump’s deportation machine,” added Menchaca.