By Kings County Politics
0
comments
Posted on May 2, 2018 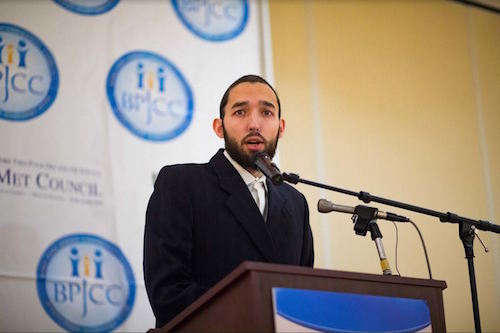 In what increasingly appears like a consensus community anointment rather than a candidate for public office, the well-regarded and even better connected Simcha Eichenstein yesterday announced his candidacy to succeed retiring Assemblyman Dov Hikind (D-Borough Park) in the 48th Assembly District.

A lifelong resident of Boro Park and well-known member of the community, Eichenstein’s candidacy was long anticipated and immediately applauded by community leaders.

For the past three and a half years, Eichenstein has served on Mayor Bill de Blasio’s policy team in Albany, where he has been responsible for lobbying for legislation important to New York City. In this role, he routinely interacts with assembly members and senators and is both well-liked and regarded as highly effective.

Prior to his appointment to the de Blasio Administration, Eichenstein served as a senior advisor to State Comptroller Thomas Dinapoli. In that capacity, he sat in on policy meetings with the Comptroller and worked as a liaison with various state agencies to resolve complex issues.

Hailing from a prominent rabbinical family, Eichestein’s involvement in helping those in need began while he was still in yeshiva. Following a number of years as a successful community activist working with various mosdos and community organizations, Simcha understood that he would be more effective aiding his community if he learned the inner workings of government.

“Once people see you as a problem solver, you have to make a choice—either let them down or rise to the occasion,” Eichenstein said. “I strive to help people and never let them down.

“I look forward to speaking with the many people in our district that I have not had the opportunity to meet yet,” Simcha continued. “I want to talk about what I’ve done and what I’d like to accomplish, but most importantly I look forward to hearing about your needs and your ideas as I seek your support.”

Hikind said he was delighted to endorse Simcha. “I am relieved that someone with Simcha Eichenstein’s qualifications, experience and energy is stepping up as a candidate to represent our community in Albany,” said Hikind. “Effective public service requires relationship-building, a dedication to helping others, perseverance, and compassion. Simcha has all of these traits and has proven himself time and again as he works tirelessly for our community. He will make an excellent Assembly Member and I am eager to see him succeed.”

“Simcha grew up in Bobov,” said Yoel Rosenfeld, a Bobover askan. “In his work in government, Simcha has accomplished for Klal Yisrael these past few years as well as any elected official. That is why we support him in his run for the Assembly and we anticipate that he will accomplish much more as our elected representative in Albany.”

“I got to know Simcha in his work at the mayor’s office,” said Rabbi Yitzchok Moskowitz, administrator of Khal Machzikei Hadas of Belz. “He is a great, smart, young, ambitious chassidishe yungerman and a true askan for Klal Yisrael.”

“I have admired Simcha Eichenstein for many years and have every confidence that he will be an outstanding Assemblyman and a source of pride to our community,” said Chaskel Bennett, co-founder of the Flatbush Jewish Community Coalition and a member of the Board of Trustees, Agudath Israel of America. “I strongly support his candidacy and know that many of my fellow askanim are equally excited to see him finally run for public office. He’s ready.”

“Simcha has been up in Albany for the past couple of years and knows all Democratic members of the Assembly on a first name basis, and has relationships with them,” said Leon Goldenberg, co-founder of the Flatbush Jewish Community Coalition and a member of the Board of Trustees, Agudath Israel of America. “He’ll be able to work with them and will be able to help our community.”

Among others being rumored to be looking at the open seat include Republican District Leader Nachman Caller.