Following intense community and local lawmaker pushback, the Metropolitan Transportation Authority today decided to postpone the planned summer rollout of the Select Bus Service (SBS) on the B82 bus route that cuts across southern Brooklyn, according to sources.

The B82 route runs through major arteries of southern Brooklyn from Coney Island through Bath Beach and Bensonhurst and then along Kings Highway between Marine Park, Midwood, Flatbush and East Flatbush up Flatlands Avenue through Flatlands and Canarsie before ending at Spring Creek Gardens, formerly Starrett City. 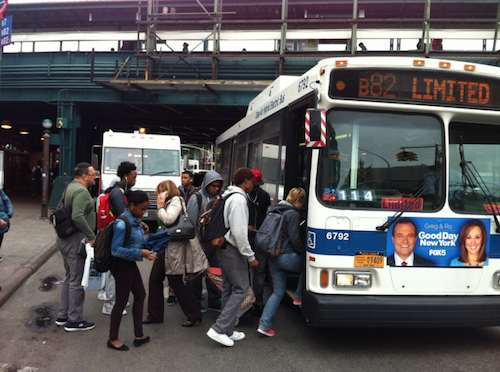 SBS service includes off-board fare payment, bus lanes, traffic signal priority, and longer spacing between stops. The bus lines on paper are supposed to service communities now well served by the subway, but has had a mixed reaction with a growing number of residents distressed in SBS taking away a good number of valuable parking spots and making it especially hard on seniors that use local stops which the SBS bypasses.

The postponement comes after City Council Member Chaim Deutsch (D-Sheepshead Bay, Midwood, Manhattan Beach, Brighton Beach) led a group of Southern Brooklyn’s elected officials in a meeting with Byford and Department of Transportation officials on Monday to discuss the plan, which originally was expected to roll out this summer.

KCP posted two stories on the issue this week, and both received numerous comments that highlighted the huge gap of opinion between bicycle and transportation alternative advocates – many of whom live closer to subway lines and nearer to Manhattan – and residents that live in the transit-starved neighborhoods of Southern Brooklyn that utilize the B82.

The transportation alternative advocates argued that instituting the SBS along the B82 route would encourage people to drive less and take alternative means of transportaion.

Local residents and lawmakers argued that taking a much-needed traffic lane away on these thoroughfares would further congest them. They also expressed concerns that the SBS would take away much-needed parking spaces, and mean less local buses running, hurting both seniors and the disabled who depend more on local stops.