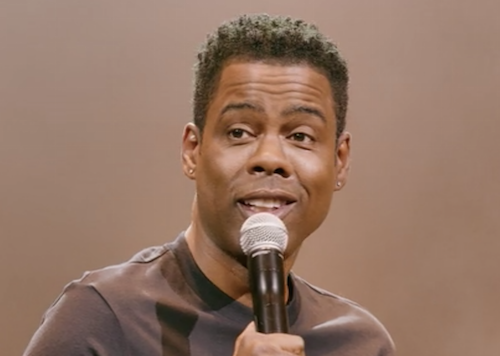 Chris Rock spews out the theme of his special at the Brooklyn Academy of Music, minutes away from the Bed-Stuy neighborhood where he grew up.

In 2018 there is such an influx of B level comedians that it is hard to sift through the drudgery and find an actual voice worth listening to. Chris Rock is one voice that takes an art form to another level with genuine earnest and sincerity. The question I found myself asking during Tamborine is this: Mr. Rock’s aesthetic? Is this his voice?

At first glance Tamborine delivers on the trademark Chris Rock style, but as Matisse once stated, “An artist must never be a prisoner of himself, prisoner of a style, prisoner of a reputation, prisoner of success…”. The $20 million Chris made from the Netflix special makes sure that he is able to experiment with his style and influences.

In this respect, I can’t help but feel that Jerrod Carmichael is a huge influence on Tamborine. It is beautifully shot by Bo Burnham who also filmed Mr. Carmichael’s most recent HBO special “8.” The two definitely compliment each other. For example, when Chris goes into a confession about his infidelity it is accentuated by a long tense zooms of the camera. This masterful direction gives the viewer an experience that might even rival the actual experience of being in the room and actually hearing the Chris drift into his own psyche. Burnham definitely understands Rock’s vision and deserves just as much credit for this special as Chris Rock.

“Tamborine” (the name is taken from a 1985 Prince track) is a more personal Rock, the special starts with police brutality jokes. Normally comedians would start off with a  much easier topic but for the Carlin-influenced comedian, Rock’s expertly navigates the sensitive Brooklyn audience. Mr. Rock is comfortable with topics like bullying, guns, and race; it’s when he enters the jokes about his marriage or personal failures that the $20 million special feels less comical and more confessional by the end.

By the end of Tamborine  one finds themselves doubting the mythos of Rock’s celebrity. Hell even Rock has an epiphany during the special, that he is high school drop out (he mentions Boys & Girls High in Bed-Stuy) and it took his divorce te realize he is a world-famous comedian and has “Made It.”

By the end of the special I felt this was the beginning of an artist taking a new step into deconstructing the idea of him. Chris Rock battles the ideology of him as a father, husband, celebrity, and most important as a man who has time to navigate his own neurosis and vices.  So is “Tamborine” good or bad, or is it a necessary means to a new beginning?

Alexander Payne is a Brooklyn-based stand up comedian and writer. He was born and raised in South Central Los Angeles.