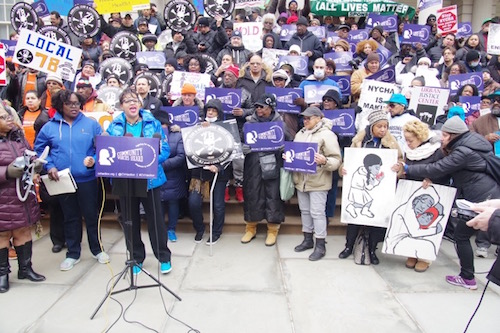 NYCHA residents commended the de Blasio’s recent plan to allocate $1 billion over the next decade for roofing repairs at a few NYCHA developments, but note that this effort will not abate the $17 billion backlog in NYCHA’s capital budget, more than $9.4 billion of which are needed for vital infrastructure repairs.

Failure to provide this needed funding that has allowed for the presence of toxic mold, the absence of heat and hot water exposing tens of thousands of NYCHA families to adverse health conditions, rally attendees said.

Rally attendees also produced The People’s NYCHA Plan, which CVH crafted along with union leaders, which would create a NYCHA targeted infrastructure repair program would allow for augmented apprenticeship programs with labor creating pathways to union jobs and keeping NYCHA strong for the next generation of New Yorkers.

“We’re well aware of the decline of livable apartments in NYCHA developments and the disinvestment in addressing this issue. Greater New York LECET is committed to being a part of the rebuilding of NYCHA and securing the necessary resources to do it. We support Community Voices Heard in their demands for $1 billion for NYCHA’s capital budget,” he added.

City Comptroller Scott Stringer proposed that the part of the money come from the Battery Park City surplus, taking $40 million dollars annually from the surplus over the course of 10 years and adding it to the NYCHA budget which will total $400 million dollars.

“The Battery Park City Authority has to vote for it, there are three people that serve on the Battery Park City Authority. The first is the Comptroller, you got my vote. Second person who has a vote, is the Governor, I told him about this and he says I will vote ‘yes’. The third person who needs to say yes and then the deal is done, is the Mayor. Come on Bill!,” he added.

According to The New York Daily News, Mayor De Blasio wants to keep using the Battery Park City money to finance affordable housing as part of his effort to create 200,000 affordable units by 2024. He doesn’t want to tie it to NYCHA.

NYCHA Spokesperson Zodet Negron responded taht decades of federal and state disinvestment have resulted in the decay of NYCHA’s buildings.

“The Authority needs the federal government to step up to the plate like Mayor de Blasio has and follow his lead. Since taking office, Mayor Bill de Blasio has demonstrated his unwavering support of public housing, investing hundreds of millions of dollars to improve residents’ quality of life, including roof replacement, brickwork and safety and security upgrades,” said Negron.

“He recently committed an additional $1 billion dollar investment for roof replacement, which will benefit more than 120,000 NYCHA residents over the next 10 years.  Roof replacement is a critical step in addressing the extensive repairs needed across our buildings reducing leaks and moisture, one of the primary causes of mold.”

Editor’s Note: This story was updated with a response from NYCHA.