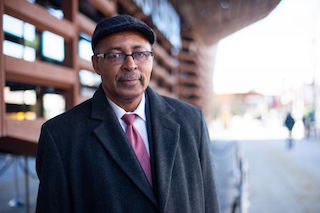 James Caldwell, one of Brooklyn’s most shining lights and a person as Godly as they come, passed away today, May 27, 2021. He was 69.

Mr. Caldwell, as I called him, was a mentor, source and friend. He trusted me to report on crucially important issues to his community such as the Third Party Transfer stories, which wound up saving millions of dollars of Black generational wealth. He also advised me on many personal and professional issues. I am devastated.

But as devastated as I am personally, it pales in comparison to what his loss means to Brooklyn’s Black community. For nobody, bar none looked out for and helped his community more selflessly than Mr. Caldwell.

He knew all the politicians and supported a good many of them. But if push came to shove, and it was a question of helping somebody out in the community or being politically expedient, he never flinched. He always sided with the community.

“Mr. Caldwell was like my uncle. He was the only one I gave license to yell at me and then he’d call me back a few days later, and he would laugh and pray with me and tell me how proud he was of me,” said New York State Attorney General Letitia James. “He loved his community and understood the issues of people of color. I’m going to miss him because he kept me honest and he stayed on me to make sure I was always representing the interests of the community and I will always put the community first and be there for the community. That will be his legacy. May he rest in peace.”

“James Caldwell was a mentor and dear friend. He left an indelible legacy as an advocate and friend to his Crown Heights and neighboring communities,” said Deputy Brooklyn Borough President and Chaplain Ingrid Lewis-Martin. “Residents of all ages have been positively impacted by Mr. Caldwell through his hard work and effort to ensure that children to senior citizens received their fair share of services. In my lifetime, there will never be another James Caldwell. I thank the Creator for the opportunity to have known and worked with this iconic man.”

James Caldwell was born in Columbia, South Carolina, and after a number of years in the U.S. Army, where he worked in intelligence, he migrated to Crown Heights, Brooklyn. He served for 37 years in the 77th Precinct Community Council, a good many of them as president.

Mr. Caldwell was a bedrock Christian. His faith in Jesus Christ and God was unwavering.

He was predeceased by his late wife, Shirley, and is survived by his mother, a sister and a brother. At post time, funeral arrangements remain pending.